Warning: "continue" targeting switch is equivalent to "break". Did you mean to use "continue 2"? in /www1/dfa/www.viewscouldbemine.com/web/wp-includes/pomo/plural-forms.php on line 210
 Sadler's Wells Archives - views could be mine

The New York based Cedar Lake contemporary ballet are touring the UK and did two fantastic shows at Sadler’s Wells showcasing a triple bill.

If you are able to see them in Cardiff, Edinburgh or Bradford you will be in for a treat. 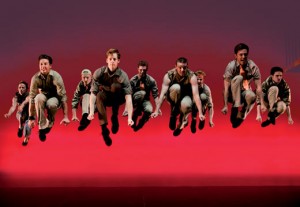 It is 55 years since West Side Story was first performed.  This pretty much makes it a vintage musical.  Inspired by Romeo and Juliet is follows the rival gangs of the Sharks and the Jets in New York.  The Sharks are Puerto Rican whilst the Jets are Polish-American.  They’re not too keen on each other.

Like the Montague and Capulet rivalry there is a love interest in the mix.  Tony (a Jet) loves Maria (a Shark).  The rest of the clan seems none to pleased about this.  A fight is going to happen.  Tony promises he will stop it.  He goes.  Gets involved and ends up killing Maria’s brother.  Revenge is then on the cards.  You can imagine how it all ends.

As I watched West Side Story all I could think of was doing rehearsals for the battle between the Jets and the Sharks at school and trying to rack my brains as to why we never performed it publicly.  Then I began to question what kind of drama teacher would make their pupils rehearse for so long and to never allow us to show off our wares in public.  This then me sad that I was so bored I was worrying about my drama teacher from junior school.

Sadly this performance of West Side Story did not grab my attention at all.  I loved the dancing.  I think if all gang fights could be done in such a beautifully choreographed way the world really would be a better place.  I loved the set.  The stark metal stairs of a New York apartment block really worked well.  I just didn’t enjoy all the singing.  At half time my friend admitted to me she just doesn’t like musicals all that much.  I am inclined to agree with her a little.  But I don’t think of the rest of the audience at Sadler’s Wells would.  The show was sold out and has been so since it opened.  So although my friend and I would prefer a bit more dancing it is safe to say West Side Story will be selling out for the rest of its run.