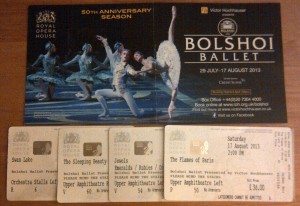 For the summer season the Bolshoi were resident at the Royal Opera House.  The Bolshoi performed 5 ballets: Swan Lake, La Bayadere, The Sleeping Beauty, Jewels and The Flames of Paris.  It has drawn the crowds in.  For every performance there has been substantial queues for returns as all performances sold out.

Sadly the Bolshoi has been making the news and not just for its wonderful dancing.  The acid attack on artistic director Sergei Filin back in January was shocking.  As he recovers from his hideous he did make it out to London and attended a performance of Jewels.  As he was brought onto stage he received a rapturous applause from the audience.

The arts are often seen as a sophisticated arena but this attack shines the light that no matter what your industry the same disputes will exist.  The motivation of the attack on Filin is thought to be due to “a cesspool of intolerable cruelty” along with rivalry between dancers and the people who manage them.

The Bolshoi is impressive to watch.  They do put on a performance that draws you in.  But the main downfall is the obsessive bowing.  During Swan Lake it really took away from the flow of the performance with the constant pause for appraisal.  Sleeping Beauty was probably the strongest out of the four ballets I saw.  It had excessive bowing but not to the point of rolling my eyes.  And it had the story which flowed and really drew you in.  I am looking forward to seeing the interpretation of Sleeping Beauty by the Royal Ballet in the coming year.

Along with the Bolshoi there have been many great visiting companies to London this summer.  The Coliseum has played host to the Boston Ballet, the Moscow Stanislavsky Ballet, Fredrick Rydman and the Shanghai Ballet.  To have so much high quality ballet on offer has been a real treat for lovers of dance.  It is also a real treat to those of us who are new to their love of ballet.  I have been able to see so much to extend my knowledge of ballet and to experience the differing styles of various companies.

Now looking forward to a some great performance from the Royal Ballet and English National Ballet in the coming months.