Warning: "continue" targeting switch is equivalent to "break". Did you mean to use "continue 2"? in /www1/dfa/www.viewscouldbemine.com/web/wp-includes/pomo/plural-forms.php on line 210
 August 2017 - views could be mine 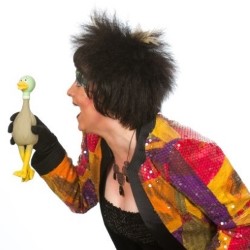 There are few hours in your life that will be as joyous as the hour you will spend with Ada Campe.  An old school variety act who I am sure would have been gracing the boards of Wilton Music Hall in its height (which I am assuming was the late 1800s…).  Ada has a magical air about her that really makes me believe she is ageless and has seen it all.  And will live for at least anther 100 years.

Ada Campe takes us on a tale of her youth after attending a funeral of a dear friend.  She shares such nuggets as ‘I used to know your grandmother.  We would travel together, travelling in the luggage compartments on trains.  Snogging!’  Just joyous.

Ada cut her teeth in entertainment by working her summers at a carnival on the Welsh coast.  Dressed as a strawberry (I’m not sure why, it made perfect sense at the time, though).  Here she met some talented women who taught her the art of cabaret.  She shares some of their acts with us including some magic (not good magic – nowhere on the poster does it say good magic…) which leads to some spectacular audience participation.  The balloon magic was a particular highlight for me.  It was such innocent, silly and wonderful fun.

5 stars.  Definitely one to see.  You’ll be glouriously delighted you went to see this show.