Warning: "continue" targeting switch is equivalent to "break". Did you mean to use "continue 2"? in /www1/dfa/www.viewscouldbemine.com/web/wp-includes/pomo/plural-forms.php on line 210
 April 2016 - views could be mine 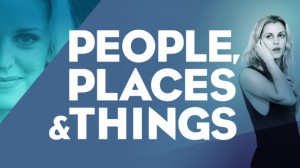 People, Places and Things has transferred to the Wyndham’s Theatre after a critically acclaimed run in the Dorfman Theatre at the National.  The lead actress Denise Gough won the Oliver the night after I watched this play.  If she hadn’t won there would have needed to have been a recount.  Her performance was pure brilliance.  This was already a hot ticket so pause reading this and book a ticket now!

People, Place and Things follows the addiction of Emma, an actress, who is checking herself into rehab. She is funny, likleable and at times a little too relatable.  Denise Gough perhaps gives the most realistic performance of a drunk I’ve ever seen.  Just the right amount of stumbling and mumbling.

This was a joint production between the National Theatre and Headlong.  Headlong were behind the brilliant Chimerica which I adored when it transferred to the West End in 2013.  People, Places and Things had the same pace, sharp change of set and drew you in to the story in the same dynamic way.  Please, Headlong, keep producing these new, fresh, fast placed plays.

People, Places and Things is on the Wyndham’s Theatre until 18 June.  Tickets available online and day tickets are available at 10am for £25.

Whilst researching some films for a project at work I came across Woman in Gold with Dame Helen Mirren and Ryan Reynolds.  Turns out it was downloaded on our Apple TV so I had a little gander of it last night.

Woman in Gold is about the story of Maria Altmann, a Jewish Austrian woman who fled to the US during World War Two.  Her family had been successful business owners in Vienna during the early part of the 20th century.  Her aunt Adele had been painted by Gustav Klimt and the painting, along with other artworks, were looted by the Nazis in the 1930s.  The painting is know as Adele Bloch-Bauer I, painted in 1907.  You’ll recognise the painting.  It’s pretty famous.

The younger Altmann is played by the brilliant Tatiana Maslany who you probably won’t have seen in Orphan Black.  Shame, as you have missed out.  Woman in Gold reminds us of the lives that people had torn away from them.  It is a tear jerker with softer and funnier sides to it.  Definitely worth a watch.  And it has really made me want to visit this amazingly beautiful painting.

You can rent Woman in Gold from iTunes now and see the painting for real at the Neue Galerie in New York.

Have you booked tickets yet for The Winter’s Tale at the Royal Opera House?  Well, you should.  Choreographed by Christopher Wheeldon and music by Jody Talbot with Lauren Cuthbertson in the principal role and first came to stage in 2014.  It is a real delight and should not be missed – I will be seeing it at least twice in the coming month.

2016 marks the 400th celebration of Shakespeare with multiple cultural organisations marking the occasion and the Royal Opera House’s production of The Winter’s Tale is part of this celebration.

Tickets can be bought from here. Remember that Royal Opera House also has about 50 days seats available on the day. 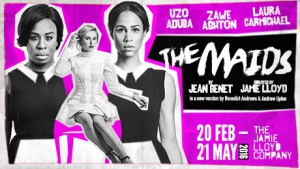 The Jamie Lloyd Company production of The Maids at the Trafalgar Studios is a star studded line up that should not be missed.  The brilliant Uzo Aduba from the Netflix hit Orange is the new Black, the talented Zawe Ashton from the rather amusing Fresh Meat and Laura Carmichael from Downton Abbey.  Three talent and zeitgeist actresses, for sure.  Sadly the night I attended Uzo Aduba was not performing yet her shoes were filled by the incredible understudy (sadly, I did not note her name) who should certainly not be an understudy and owned the role.

The Maids was first performed in France in the late 1940s and focuses on two sisters, Solonge and Claire, who are maids for their rich mistress.  The two sisters act out fantasies of murdering their boss wearing her clothes, make up, perfume and jewels.  The play, I learn afterwards, is loosely based on two French sisters who murdered their employer in the 1930s.  Although this production still uses the format of maids and a rich mistress the dialogue felt so fresh it could have been any workplace or any group of female friends with issues.

The play is one act with barely time for the two main actresses to catch their breathe.  The intensity of no scene change and remaining in the same set throughout kept you involved throughout.  Shame the seats at the Trafalgar Theatre are so uncomfortable as that did make me wish their was an interval just so I could regain feeling in my lower back.  That aside, you must go see this play.  I think I’ll be going for a second viewing to enjoy Uzo Aduba in the role.

The Maids is showing at the Trafalgar Studios until 21 May.  Buy tickets here with £15 tickets available for sale on the first Monday of the month.