Warning: "continue" targeting switch is equivalent to "break". Did you mean to use "continue 2"? in /www1/dfa/www.viewscouldbemine.com/web/wp-includes/pomo/plural-forms.php on line 210
 April 2014 - views could be mine 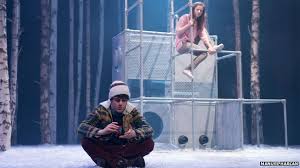 It’s not often I take to my feet after a performance.  It seems un-British.  But last night I had to leap to my feet as blackness fell at the end of Let The Right One In.  It is a play that drags you in from the get go and has you on the edge of your seat throughout.  With strong performances from the whole cast this really is a play worth seeing.

Let The Right One In follows the story of Oskar.  Oskar is a bullied boy living with his single mum.  He is a bit of loner spending time avoiding the bullies or being bullied.  It’s not such a great time for Oskar.  Especially as his mum is pestering him to stay away from the woods as a murderer is on the loose.  But Oskar meets a young girl, Eli, in the park.  And he now has a companion.

Eli is Oskar’s new neighbour.  Living with what appears to be her father.  Yet, there is something about Eli that isn’t totally clear.  But she is kind to Oskar and he seems to take solace in their relationship.

Let The Right One In is playing at the Apollo having transferred from The Royal Court.  It was wonderful to be at the Apollo and support the theatre as it rebuilds after the closure in December.  Tickets can be bought online or day seats are available.

If you need something to do this Easter weekend…..I’d strongly recommend Let The Right One In.